A large London school atrium roof provided a welcome source of natural sunlight into the centre of the academy providing a light and airy environment to work in. However the glazing caused other building issues such as glare in the classrooms and on the whiteboards, especially on days of prolong sunshine.

Also overbearing solar energy gain caused the atrium are too become overheated even during partial sunny days, even with an air conditioning system. This combination resulted in uncomfortably high temperatures and hot spots in various parts of the building.

With over 435m² or 164 large panes of glass in the overhead roof, this meant that the property was getting very hot very quickly, so a solution was required as a priority. The height and the makeup of the glazing system meant it was immediately clear that an internal installation was not going to be possible, in turn making the choice of the film a straightforward one. An external solar control window film Silver 20 OSW proved to be the best solution. This high solar reflective Silver film is not only a high performance solar control film designed specifically for external applications, it has a tough outer scratch resistant layer with UV inhibitors to protect the films construction making it more durable and able to withstand the rigours of the different types of weather experienced in the UK.

The external version of the Silver film provides excellent performance better than an internal Silver window film by reflecting the solar energy away from the glazing before entering the building. Silver 20 OSW is also perfectly safe to install on the outside of the glazing without the risk of thermal breakage to the glass, which can occur by installing the incorrect performance of internal window film. External application window film prevents the constant build-up of heat without sacrificing natural light or the view to the exterior.

In addition to ensuring a moderate temperature within the property, reduced air conditioning running cost, Silver 20 OSW delivers additional benefits such as glare reduction, UV skin protection and reduce the effects of fading. Common problems in premises with large expanses of glass. Glare can be a year round problem, making it difficult to focus on boards, screens or colleagues. While the UV rays generated by the sun are the biggest contributing factor to fading and can cause damage to upholstery, furnishing and artwork, UV rays can also be damaging to skin causing skin cancer, so by filtering out up to 99% of these harmful UV rays the film chosen for this job would provide both staff and pupils at the school a more comfortable and a safe workplace.

The first part of the project was clean and prepare the glass for the film installation. This work was carried out with a great deal of care and attention, with a methodical and a careful approach ensuring years of ingrained dirt was removed from the glass so providing a clean surface for a strong film adhesion to the glass. Each piece of film was cut on site to ensure a perfect fit for each of the164 panes of glass, which covered a total area of over 435 square metres. Once the film was applied and dry, a structural silicone bead was applied to the edge of the film. This covered the film edge, glass and frame to bond the edge of the film to prevent water ingress.

The benefits of the film was realised immediately with a reduction of 5 degrees in the temperature, even before completion of the project. With a 5 degree reduction in atrium, the film not only makes the building more comfortable for occupants, it offers a huge reduction in air condition costs with a quick ROI of less than 3-4 years.

This was a large job with a number of logistical challenges, but there is no upper or lower limit to the size of job that UK Window Films is able to deliver on.

For more details about the range of solar control films available or for details on other products including privacy solutions, safety or security films, manifestation and decorative options such as digital or printed graphics, please do not hesitate to contact us on 01428 751004. 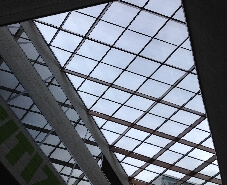 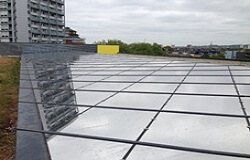